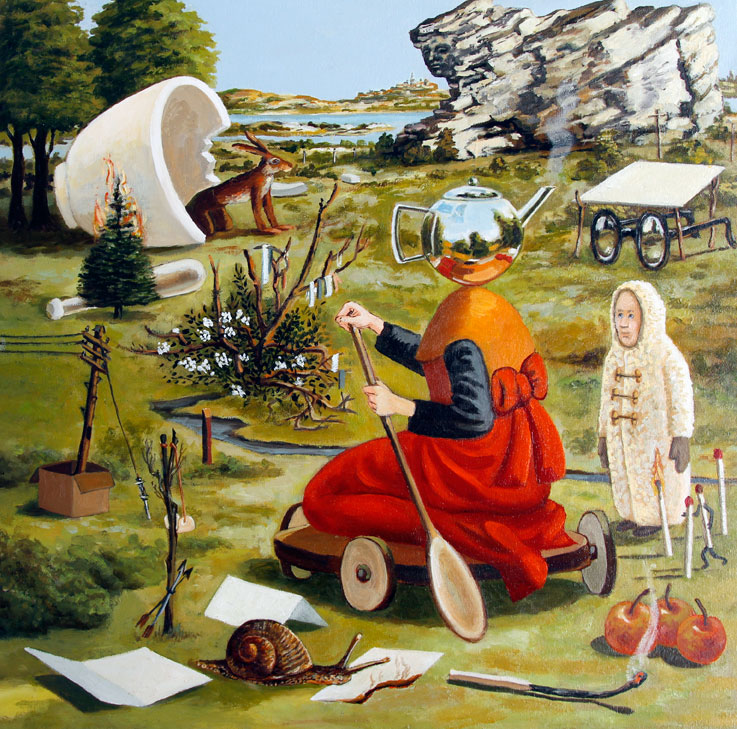 Summer 2013 I was home in Ireland for the Listowel Writers’ Week Festival—I’d been awarded that year’s Poetry Collection Prize—when I happened upon an art exhibition in the Seanchaí Centre: Two Worlds: The Allegorical and the Real. The exhibiting artists were Aidan McDermott and Geraldine O’Reilly Hynes; the promotional literature stated that they would “present us with works of dreams and reality—an alchemist’s garden of mysterious endeavours [Aidan] and the reality of nature’s hidden bowers and vistas [Geraldine].” When I walked into the Seanchaí Centre, my eyes were immediately drawn to a striking Surrealist work by Aidan, displayed prominently on an easel in the cozy room: a painting of a woman in a vibrant red dress with a shiny teapot head, kneeling atop a wooden dolly, which she attempts to row with a large wooden spoon. Charmed by the dazzling teapot, I ambled over to take a closer look. I was no sooner in front of the artwork than my brain kicked into narrative mode: I wanted to make sense of the hare, the broken mortar and pestle, the rag-draped bush, the burning tree, the spectacles, the snail, the apples, the matches, and the gender-neutral child in its white (sheep’s?) clothing. How did all these puzzle-pieces fit together? What was the story I was reading? The Interval Gallery in Dublin writes that Aidan McDermott “is a painter of versatility and inventiveness. He borrows ideas and inspiration from both high and low art, including myth, symbolism, comics and children’s illustration. He depicts environments inhabited with the seemingly insignificant objects of our daily life and imbues them with an allegorical and narrative twist.” No kidding. I could’ve spent months in the Seanchaí Centre in Listowel trying to unravel Aidan’s “A Head of Steam”.

Several months later, I was back in New York, in the throes of polishing my poetry manuscript, when “A Head of Steam” started boiling in my head. As I revised my work, I began to see some of the painting’s imagery reflected in my poems. For example, I have a number of pieces with fire imagery, two of the more explicit being a sequence about the 1943 Cavan Orphanage fire in which 35 children perished and “Letterfrack Man”, a memorial for a former industrial school inmate who self-immolated in a London park in 1968. Kettles and teapots are scattered throughout my work. (Hey, what can I tell you, I’m Irish.) A snail—or a shellagopukka, to be precise—also makes an appearance. Surely, the spectacles speak to my bearing-witness motif. Of course, I was having a field day with the (unreliable/frustrated? (hint: check the dolly wheels)) mother-figure and the woolly duffle-coated sheep-child. In one of my poems, a wooden spoon is used as a weapon instead of an oar. I don’t have a hare, but I do have a shape-shifting rabbit-doctor. And what about that far-flung city in the background?—when I squint my eyes, is that the Empire State Building I see? The more I over-laid my poems on Aidan’s painting, the giddier I became. The two artworks were in great conversation with one another. Fast friends, they could finish each other’s sentences. I decided there and then that nothing would suffice but to have Aidan McDermott’s “A Head of Steam” as the cover art for my debut poetry collection.

I tracked Aidan down in Dublin; luckily, “A Head of Steam” was still available. We agreed on a price, and before you could schtick on the kettle for a cuppa, my (tea) pot-headed mama arrived on my doorstep. She now hangs in my living room, across from the infamous Goose Girl strolling among the bluebells.

In most traditional publishing houses, an author has little or no involvement when it comes to his or her book cover design. Nevertheless, I’m prepared to fight for “A Head of Steam” to grace the cover of my recently completed poetry collection Little Witness.

You can view more of Aidan McDermott’s artwork on the following links:
http://theintervalgallery.com/aidan-mcdermott1/
http://www.flickr.com/photos/67734450@N02/9007059712/in/photostream/

3 thoughts on “A Head of Steam” 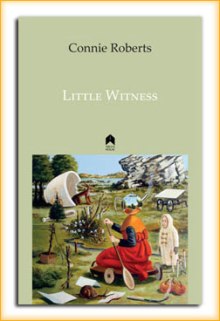 Get an Autographed copy!
U.S. Purchases Only: